Home » Cabin Mystery
The ice has not yet gone out on the Copper River.  I’ve come out to our
cabin to spend time working on my writing, without distractions, but nature
itself is a behemoth wondrous distraction, or at least it can be. Some may see it as repetitive and empty; “you’ve seen one mountain, you’ve seen them
all” type thinking. But there is life and death to evidence just beneath the
surface if you can sit still long enough to see.
Did you ever have a feeling you couldn’t quite place? I’ve got four days to write, yet my mind is as stubborn as the river ice; hardened and unable to flow. Something is bugging me but I don’t know what. I couldn’t put pen to paper like I’d planned to do…this, after being interviewed just a couple days ago by a local magazine about writing and creating an artful life. My declaration was clear:  I don’t believe in writer’s block (I refuse to give the term so much power). Never one to procrastinate, I set my schedule and was determined to get to work, but when I arrived at the cabin, after a 3 hour drive up and down and around tall mountains, along a snaking riverbed, and across a white-washed pass where snow-machiners were enjoying their end-of-season thrill rides, I felt nothing but a swelling of gratitude for the wondrous, picture postcard world I inhabit each and every day, and all this without a single RV in sight.
But I didn’t want to work. I just wanted to sit in the sun and watch the river go by. I just wanted to daydream and make a fire, and kick my feet up and listen to the chink chinking of ice breaking up right  in front of my eyes. I just wanted to watch the clouds barrel in, watch the afternoon rain gently falling, and hang out with the dog in the fresh clean air. So when the sun parted the clouds and continued its burning of huge cracks in the river ice, I didn’t do one damn thing but sit there, and feel grateful.
So me and the dog were sitting around the fire, watching the river flow, when I spotted a dark shadow moving over my head. Ravens are big birds, really big birds and this one was barking so loud and his buddies were following close behind him, so I decided to follow them and see what all the ruckus was about. I walked upriver a ways and there I spotted an eagle swoop down and chase all those black birds sky high and outa there while he protected a cache of foxes. Dead frozen foxes. One, two, maybe three foxes, all in the same small area, atop chunks of unmoving river ice. I don’t know how they got there, or why they were congegrated in one small area, but I had a few hunches. All in various stages of decay, perhaps they were cached by the eagle, then floated down the river a ways before being stopped by cakes of ice. Or maybe the eagle brought them to this spot, one by one, dropping each one from the grip of its talons and was protecting its hard earned prey. You see, I wasn’t present to see what had happened beforehand. 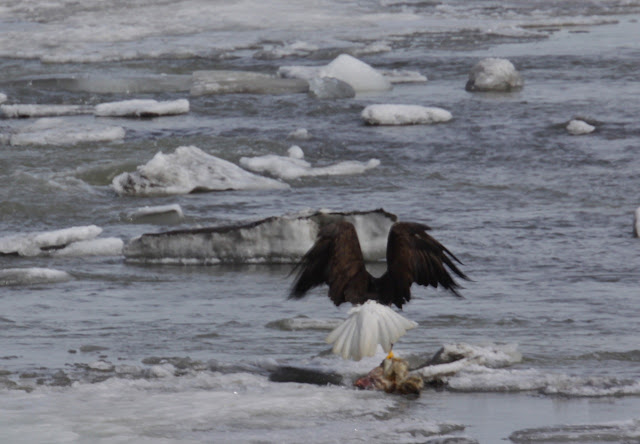 I figure I wasn’t meant to get any work done on this trip. I was meant to witness this mystery, this particular scene, this strange event. 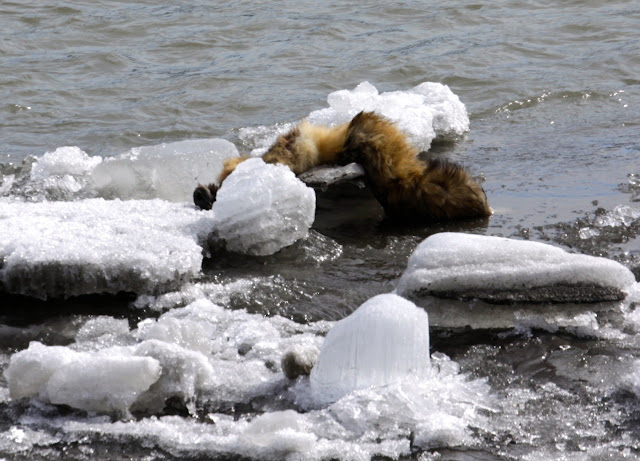 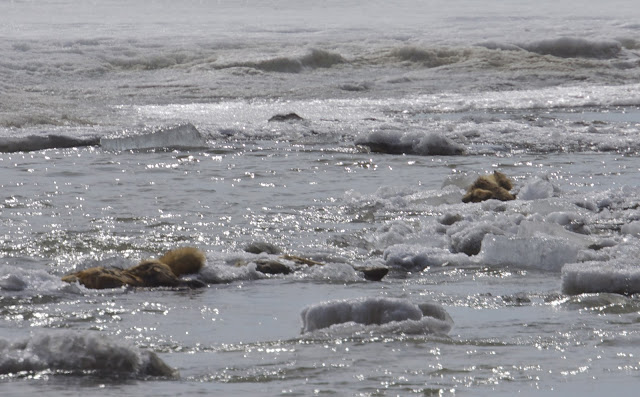 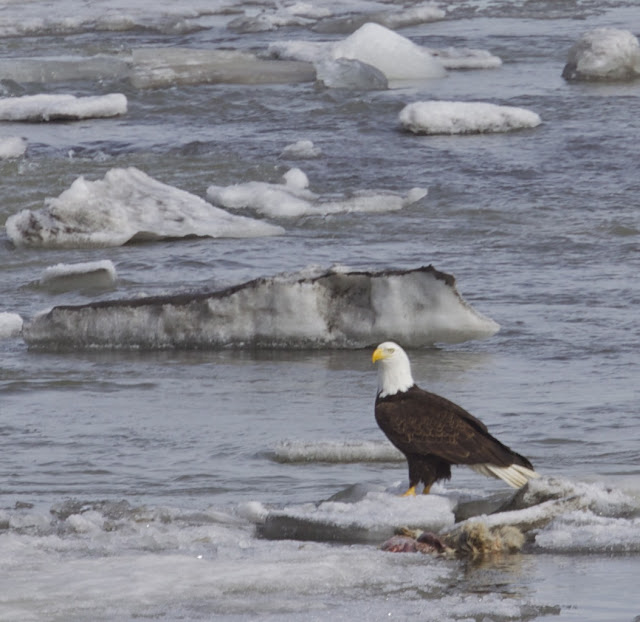 But the scene just reinforces the fact that we are a part of the circle of life. The world is beautiful and sad and scary and peaceful and violent…every contradiction and every paradox that baffles and makes me wonder about the answers to the big questions has informed me of this much: We are not separate from the whole of the natural world; we are not bigger, better, faster, stronger, smarter. Someday we will all fall prey, human and non-human alike, churning and turning, creating and destroying as the wheel of life keeps circling on and on. Like those squawking ravens barrel rolling above my head.
Like me and the dog, sitting by the fire, watching the river roll by.