Home » First Thought. Best Thought.
ALL my life, I’ve been fascinated with how the mind works; how we think, dream, make decisions, intuit.
I had a doctor’s appointment the other day. For some reason, as I was driving to town, I had the “feeling” that she would not be in her office. No, not possible. Doctors show up, I reasoned. I drove on with another thought: I don’t have an appointment today, even though it was on my calendar in two places; my computer and the paper calendar that hangs near the phone. When I got to the office, the receptionist informed me that the doctor was in fact, not there; and that my appointment was the following week. I made a mistake, and my intuition was trying to tell me so, but I chose not to listen. This has happened  hundreds of times; I get a “feeling” about a certain situation, usually a first thought, then go through a list of sensible reasons why my feeling has no basis; and then I act on those judgments. But really, how reliable is intuition? Should we listen? How do you know when something is right; when you know it fits and you possess a felt-sense for it, pursuing it without much thought to the contrary.
The definition of intuition is this: The ability to acquire knowledge without the use of reason. The word comes from the Latin word “intueri”, which is often roughly translated as meaning “to look inside” or to “contemplate.” Intuition provides us with beliefs we cannot necessarily justify, and is popularly associated with the “right brain” where the origin of aesthetic abilities lie. Some scientists even contend that intuition is associated with innovation in scientific discovery. Einstein believed in it: “intuition is grounded primarily in the feeling of the heart–in its receptivity and its tendency to move outward. It depends on a deep caring and receptivity that pushes one to go beyond what is currently known…” 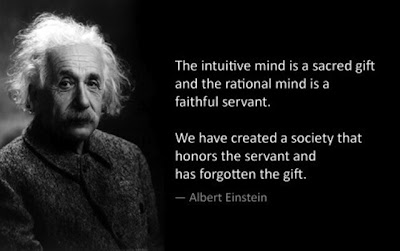 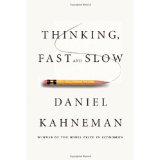 One celebrated behavioral scientist who studies intuition is Daniel Kahneman, who wrote the book, Thinking Fast and Slow. Kahneman is an Israeli-American psychologist, a nobel laureate and a founding father of modern behavioral economics. His work has shaped how we think about human error, risk, judgement, and decision-making.  Thinking Fast and Slow presents as an “intellectual memoir” which describes the machinery of the mind; how two distinct systems are at play in the decision making process; one that is fast, reactive and intuitive, and the other that is slow, deliberate and rational.
There is a balance between the two systems that the mind is constantly pushing to resolve, a sort of undecided, on-the-fence mentality that brings forth both our enduring flaws and our most fanciful capabilities. Which is it? Should I go with my first thought, or make a list of pros and cons to reach a more thorough and rational conclusion before acting on an idea or intuited notion?

Annie Lamott, in her book, Bird by Bird, says this about intuition:
“You get your intuition back when you make space for it, when you stop the chattering of the rational mind. The rational mind doesn’t nourish you. You assume that it gives you the truth, because the rational mind is the golden calf that this culture worships, but this is not true. Rationality squeezes out much that is rich and juicy and fascinating.”
And Steve Jobs: “Intuition is a very powerful thing, more powerful than intellect, in my opinion, that’s had a big impact on my work. Western rational thought is not an innate human characteristic; it is learned and it is the great achievement of Western civilization. In the villages of India, they never learned it. They learned something else, which is in some ways, just as valuable but in other ways, is not. That’s the power of intuition and experiential wisdom.”
In other words, it is just as important to listen to your heart, those first thoughts (they originate in the heart?) that bubble to the surface, as it is to dive deep into the ocean of rationality. We have a family story that illustrates the tendency towards favoring one mode of thinking over another. My son’s friends have chided him over the years on how slow he is in making decisions, and how thoroughly he thinks things through before acting. Even as a child, he would wrestle with which candy bar to choose from a myriad of enticing choices. We’d say…ok Chris, it’s time to go; make your choice…and after much deliberation, he’d pick the same bar (a Snickers!) almost every time after, I’m sure, weighing all the choices in his little mind. His place of employment today somewhat mirrors this predominant mode of thinking: at age 27, he works at a start-up internet company called FindtheBest.  They analyze reams of subjective and objective data and through mathematical algorithms come up with recommendations to help people make quick, informed decisions on all manner of products and services in the marketplace. Right up his alley.
Sometimes things call to me, come looking for me; decisions come easy and I just know how to proceed. Those are usually first thoughts, my best thoughts. Though I don’t believe first thoughts are 100% correct: I’ve experienced the downside of first thoughts, and those I label impulsive. Those are the first thoughts that didn’t turn out so well!
Other times, I deliberate. Those are usually subsequent thoughts that require more time to wrestle with.
How often do you listen to your fast mind, and make decisions wrought from intuitive, first thoughts? When have you been nudged in a certain direction, independent of, or in tandem with, your slowed-down, rational-thinking mind?