Home » Silence Spoken Here
I read a fascinating article recently by Gordon Hempton, an “acoustic ecologist” who for the past 25 years, has studied and recorded the vanishing sounds of nature. He says there are few places left on the globe that are free from the noises of human activity, (even remote places where planes fly overhead) and what I found most fascinating is this observation: “Silence is not the absence of something, but the presence of everything.” In other words, when you’re in a place of natural silence, you’re not alone, and you can feel it. Whether it’s bird calls or the closeness of a giant tree whose warm tones you can feel, there is a presence.
In college, I used to listen to “soundscapes” while studying; they were not musical pieces, yet highly musical nevertheless. The sounds of nature:  frog and cricket sounds, wind blowing through the trees, birdsong, rolling thunder followed by rainshowers; many sounds varying in intensity and duration, but all quite soothing and relaxing on a visceral level. I was able to concentrate more fully.
Hempton talks of how, in Sri Lanka, he observed a monk leading a group of school children on a nature walk; he actually saw the children, before he heard them. They were not chatting and bringing another place with them; they were simply observing, being in the moment at hand. Contrast that with a group of mountain bike riders, single file on a forest path, and shouting to eachother about last night’s bar scene, rather than experiencing the natural world they were traveling through. Were they aware of the sunlight snaking through the trees? Or the simple sights and smells of the forest?
I remember hiking a steep slope with a friend up to an alpine lake. We were walking along talking, when both of us simultaneously noticed, a short ways off the trail, a huge marmot lying on a flat rock, sunning itself. The wind was blowing across the tundra, and the long brown hairs of the marmot were rippling in the wind. We were stunned into silence. The moment was clear and vivid and eternal, like time stood still. Another time on a tour boat in the Prince William Sound, we witnessed the calving of a near-by glacier; the boat rocked as bergs rolled in and ice shards made tinkling sounds in the water. Struck into the moment, everyone fell silent (and then came the clicking of camera shutters). Sometimes nature wakes us up and opens us to pure perception; when that happens, a natural awe takes the place of so many  words.
I once read of a women, born and raised in NYC, who experienced panic attacks while visiting her aunt in North Dakota. While out walking on the flat, empty land where even the wind made no sound, she became anxious and disturbed. There was no sound to cushion the
voices of her inner landscape and she found the silence deafening and disturbing. Only over time was she able to sink into her perceptions and simply enjoy her surroundings. Maybe one person’s noise is another’s person’s music as each of us becomes unaware and accustomed to whatever noise we inhabit.
I enjoy the quiet and from time to time, being completely alone. I often take solo trips out to the cabin my husband built, with its 12 inch walls and super thick insulation. There is a delicious silence experienced there, especially in the winter when the land is still and covered in white and the river is frozen, making no sound.  In the absence of the humming of appliances and furnace sounds, there is a complete silence that feels like being wrapped comfortably in a soft void.
Here too, one feels a presence. In the absence of noise, perception changes…you can hear your heartbeat, feel your body from the inside out, and sense your connectedness to the source of all things. 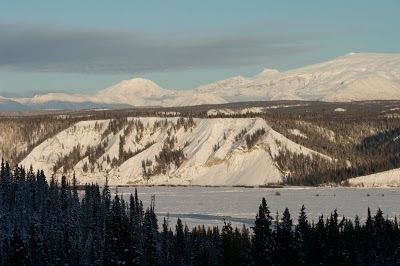