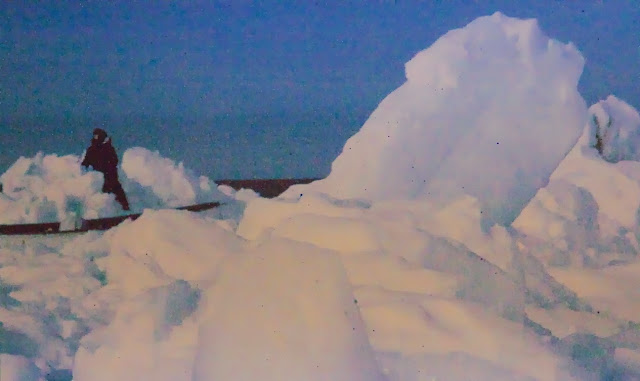 The Whale Decides
Rocky took me out on the pack ice
by way of the captain, who granted us permission
Like being on the moon.
spring ice, blue snow
white birds overhead
Rocky wasn’t carrying a rifle like most do.
Three miles out we reached the camp tents
white canvas facing a black sea
When a north wind blows, a lead will open.
We spotted three whales, twenty-ton giants
they say a-ton-a-foot
flukes rising, blow holes spouting
Rocky said the hunters couldn’t take them.
Not until the first one is butchered
and there’s nothing left of it but
bones for the polar bears.
Not taking too much is a way of gratitude.
You should not be on the ice, with baby
a hunter scolds me.
Ice floes split in the sun, snow machines
gun up, and we jump the gap as

dense fog closes in.
It’s not a baby, under my
parka, it’s a long lens, hidden

from the cold
So I can take pictures of a 100-year
old bowhead cut up in slabs
stacked on freight sleds, bouncing
on the burnished trail
racing back to town.

Today I woke to two feet of new snow on the ground, and being a lover of the lacy white stuff (excitedly digging out my cross-country skis), I thought of my time on the ice with whalers in Pt. Hope, Alaska and a poem I had written from that experience.
Indigenous cultures of Alaska still hunt and fish as a way of life, melding the conveniences of the modern world with their old ways and traditions. It was in the early 90’s I traveled to Barrow and Pt. Hope for the spring whale hunts. Using a film camera, and not fully practiced on shooting in the glare of ice and snow, the above photo was taken. I actually like the graininess and dirt spots on the lens, giving it the feel of a time long past.
The whale decides is a common phrase used by hunters to indicate it is not their explicit taking of the animal for sustenance that counts; rather, more importantly, it is the animal deciding to give itself to the hunter. Living and dying, giving and taking is a part of the great circle of life, a fact that, in our modern world, we so easily forget.

0 thoughts on “The Whale Decides”