Adventure is Out There

Home » Adventure is Out There A shipwreck. A volcano shawled in snow. Blue, glassy seas.
We started our 60 mile journey from Homer, Alaska under perfect blue skies for a 3 day excursion to Iliamna Bay and Iniskin Bay on the western side of Cook Inlet. The excitement of motoring to a remote landscape we’d never seen before to beach comb for fossils and explore an old shipwreck site was thrilling and fed our never-ending, insatiable desire for adventure.
Weather is always the number one factor when considering this ocean trek, and we had a small window of time and low tide to make the trip. A memorial, of sorts, for our friend and companion, Steve Lloyd, who has explored this rugged coastline before; he is the author of Farallon, Shipwreck and Survival on the Alaska Shore.
His fascinating book tells the story of the treacherous winter of 1910 when the Alaska Steamship Company’s Farallon struck the jagged Black Reef, stranding 38 men in the dead of winter, and how they survived day after day, week after week on the treeless, freezing and desolate shore.
A more barren, forbidding, forsaken place it would be hard to find…Shipmasters who know the place shun it as they would the gates of Hades. –John E. Thwaites, Mail Clerk, S.S. Farallon 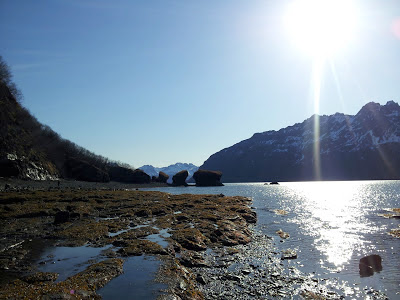 We progressed cautiously along the legendary Black Reef and motored into Iliamna Bay that is ringed by rugged, scenic, remote country where cliffs hover over jagged surf-lashed rocks. Hardly the gates of Hades this time of year; we were stunned at the beauty and grandeur of the bay. Shuffling to shore on a dingy, we hopped off and explored the beaches, finding ammonite and petrified wood, kelp beds, volcanic rock caves and melting snow trickling into waterfalls down the mountainous terrain. At Iniskin Bay we explored an old cabin strewn with remnants of perhaps an old trapper, boatman, or spiritual seeker attempting to carve out a life in this remote and rugged place. 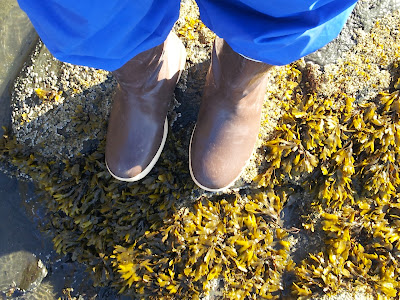 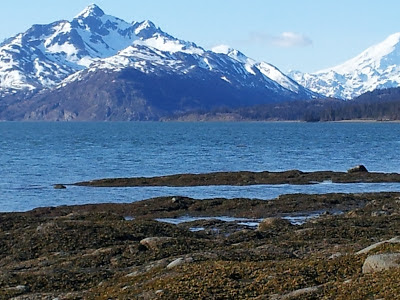 Fire on the beach. Eating hot soup out of the can, bread, hot tea and cookies…
…we rested for a while between explorations under a pair of circling eagles and the long bright days of daylight. 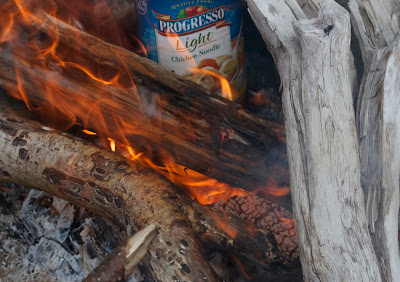 We imagined the struggle of crewman surviving on depleted food
supplies, trudging daily through knee deep snow to retrieve willow
branches for their fires, sleeping in makeshift tents with just the clothes on
their backs, in windy sub-zero temperatures.
And how five brave men, who upon leaving the group, went for
help in a dory and crossed the treacherous waters of Shelikof Strait enroute to
Kodiak. Five brave men who endured a blinding snow storm on ice caked seas, feet
wrapped in burlap, in near-starving condition…and alerted the outside world of
the Farallon’s fate.
In our windy slumber around a driftwood campfire, we thought
of how well we would sleep that night: in the blue surge, under a pink
moon rising over the menacing Black Reef of Iliamna Bay. 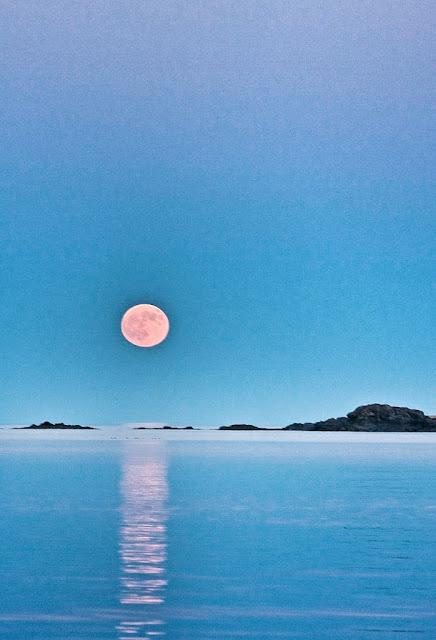 0 thoughts on “Adventure is Out There”