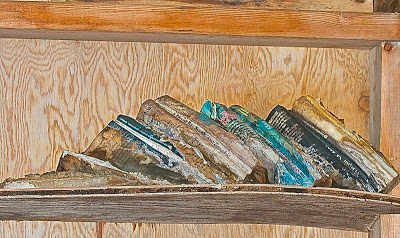 I took this photo of books on a shelf in an old remote cabin we explored on Iliamna Bay. The cabin was filled with junk; an old stove turned on its side, clothing remnants, tools, a sleeping bag, cans of food. It was obvious someone had tried to live in this place a long, long time ago.

The row of books looked strange and creepy, like a body in various stages of decomposition; the pages deteriorating and oozing into each other, worn out and exhausted by time and weather.

Immediately Chris McCandless came to mind. Chris was a spiritual seeker who came to Alaska to excavate his heart, like so many others who take to the woods on a vision quest of sorts, testing their ability to survive, asking themselves the big questions and hoping to find answers in the wilderness.

He burns his trust fund money, travels the country, and finally makes his way to the far north, seeking   solitude, self-sufficiency and what he called the “ultimate freedom.” After isolating himself (settling into an abandoned school bus), he shoots game, able to sustain himself for a while, but eventually the harsh realities of wilderness-living set in. Unfortunately, he never made it out alive, having starved to death (after eating a poisonous wild plant).

In the end, McCandless realizes the importance of the very thing he was trying to escape, that of sustaining and nurturing human relationships. Society may have “tied him down” but isolation from others is what ultimately killed him. I highly recommend the movie, Into The Wild (Netflix), about his daring adventures and final demise.

I took a magnifying glass to the photograph of books, trying to decipher what the seeker was reading. You can tell a lot about a person by perusing his/her bookshelf. Or maybe not (perusing my own, there is everything from Reverence to the Anarchist’s Cookbook), but still I wondered.

Who was he? Why did he come to this old, run-down cabin? What was he searching for, living in such a remote place?

Only two of the books revealed their identification. Youth is Wasted on the Young is a collection of quotations and extracts examining the wisdom of aging. Wry comments taken from life and literature capture the wisdom of growing older, and the adventurous spirit of youth we all experience.

“In youth, we run into difficulties; in old age, difficulties run into us.” (Josh Billings noted about Youth). Maybe the seeker was contemplating the rigors of aging; was he middle-aged, or already an old man who chose to live in peace far away from civilized society? Surely it’s not uncommon for people to feel alone and isolated as they age (especially after losing a partner, experiencing an illness, or not maintaining close family ties).  Whoever tried to eek out a life in this cabin was doing so by choice, escaping the perceived confines of their own town and community.

Testing his limits and abilities, living life fully on a razor’s edge, becoming one with nature, or trying to escape a tortured past?  Who knows?

The other book, A Place for Noah, is a story about the challenges the writer, Josh Greenfield, experienced raising a child with multiple handicaps. Noah was born with developmental delays; he did not speak intelligibly and was dependent on his family for all his physical needs. Noah’s brother, Karl, vacillates between his anger at Noah for the sacrifices his family must make in their day-to-day caregiving role and a deep love and sorrow for his brother’s circumstance. Karl does not want his brother to be institutionalized (though he is for a short period of time), yet finds it difficult to fold Noah into the normal activities he enjoys with his family and friends. Noah is an outcast with serious, lifelong challenges.

Both pieces of work reveal this: the experience of not quite fitting in with society at large; a feeling-sense of not belonging to the normal, youth-worshipping culture. By choice or by chance, many of us may at times feel we don’t belong, or we are outside the group, looking in.

Ever feel that way? Maybe it is because we are always changing and evolving in the life cycle, growing into the person we want to be, and at the same time, letting go of old habits and ways of being. At times, one feels off-kilter, in limbo or in suspended animation.

Taking drastic measures to isolate oneself in the wilderness may be a soulful, life-enhancing venture.

But sooner or later, you have to walk out of the woods and hold hands with your fellow man.