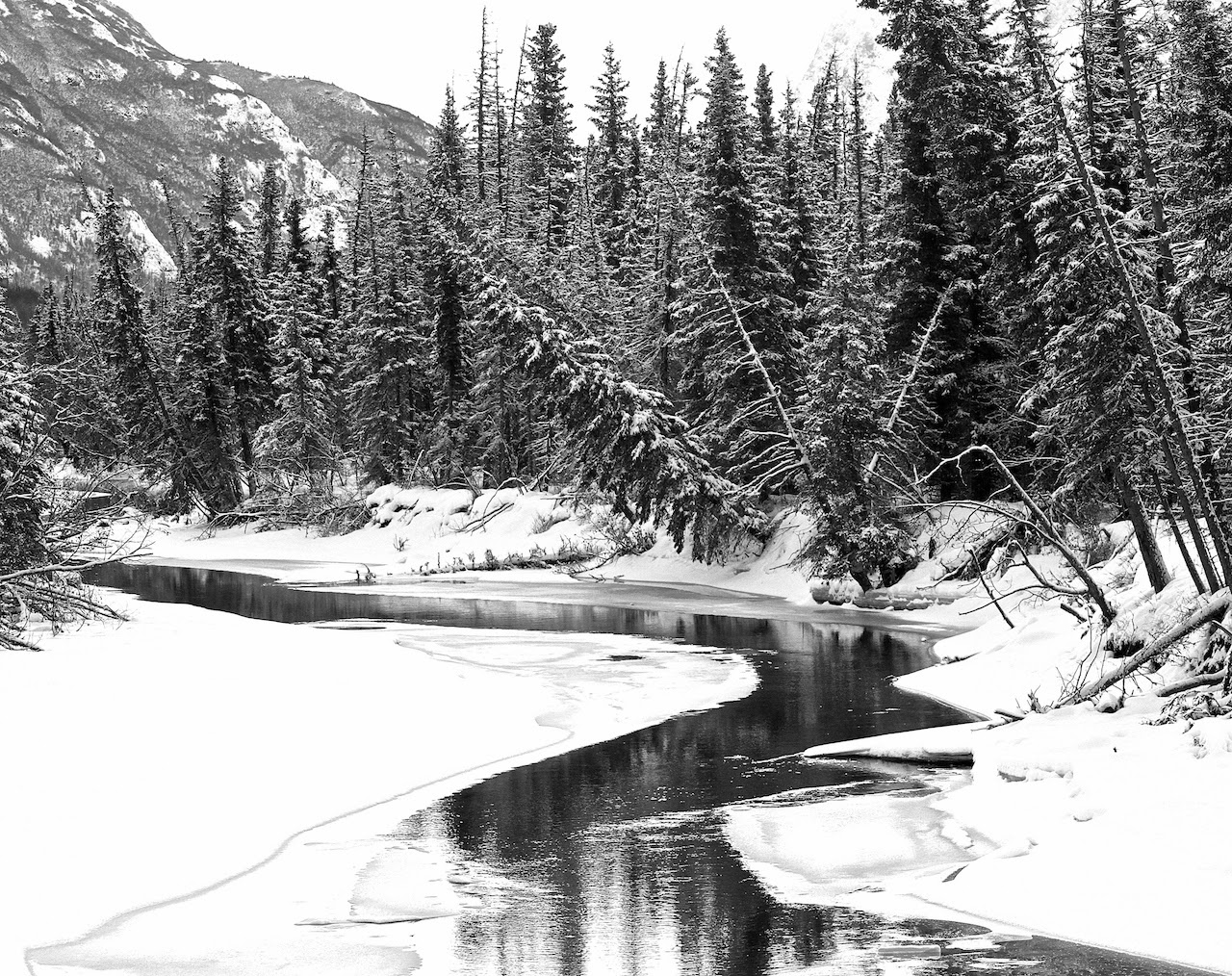 No matter how you parse it, I live in a world of black and white a great deal of the time, during the winter season. When the sun doesn’t shine, color has sailed on a ship so far out at sea you wonder if you’ll ever see bloom and petal again. No trick of the camera, no photo editing. Grays and whites and blacks…even the trees aren’t green when the sun doesn’t shine…maybe that’s precisely why they’re called “black spruce.”

I try not to let this get me down. When headed out for a hike, I only wonder how, how, how will it be possible to shoot something of variety, of interest, within such a narrow band of light and color? How can I view these woods differently; what perspective can I take to draw your interest, dear reader. I can use dim light and shadow; I can take advantage of reflection; turn a photograph into a lovely painting…albeit mono-chromatic. 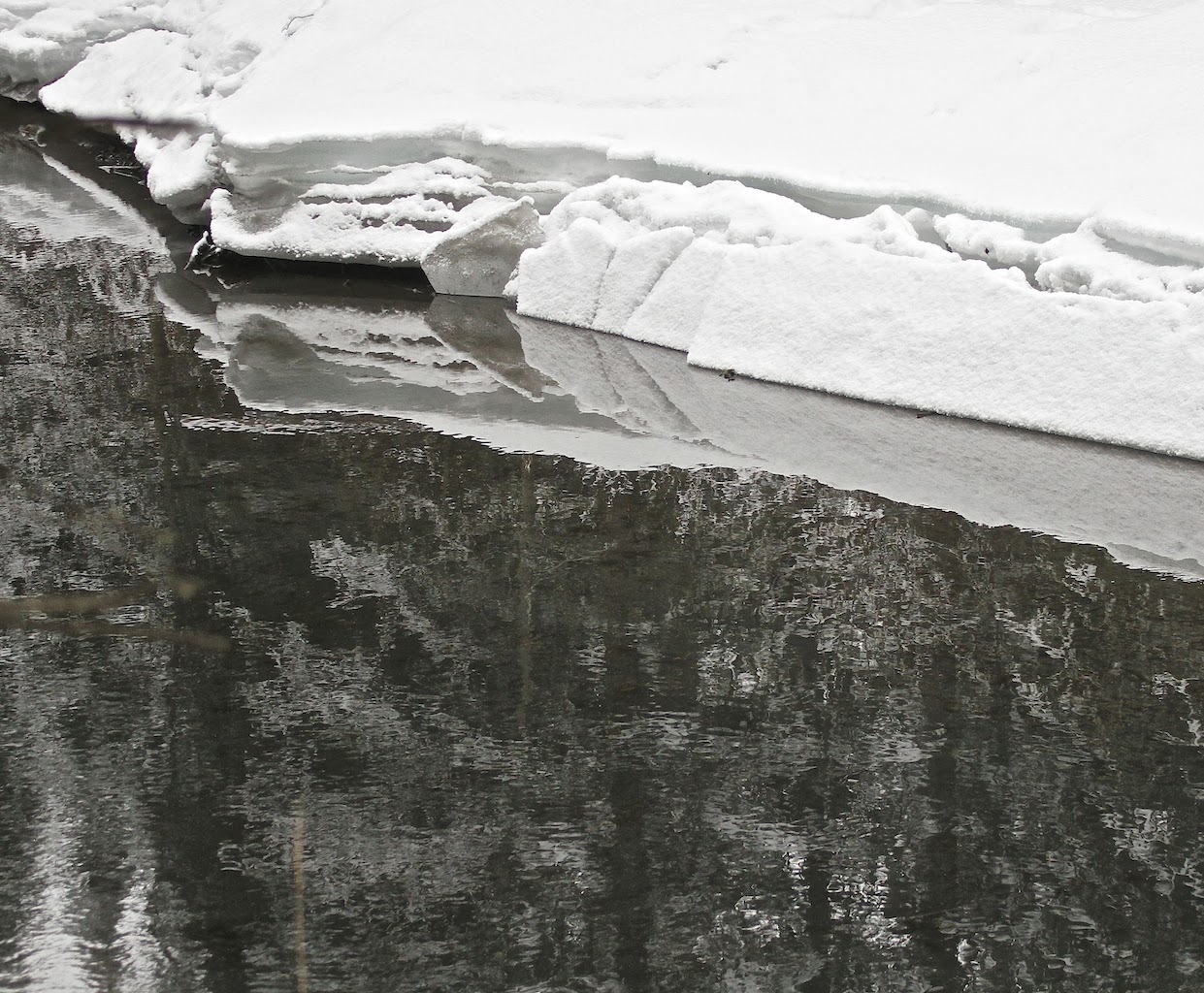 Rather than complain, comparing the lack of colorful songbirds, for example (the woods is still and quiet) to other places I’ve lived and traveled, I simply have to look deeper, find that which is hidden, be open to receiving whatever presents itself. Enforce an attitude adjustment.

That’s when I ran into these two fellas; and I thought…aha! Twin sons of a different mother. These two trees, side by side, looked like boys from the same family; underneath that WHITE birch bark, there was….drumroll…..COLOR. Lots of it. 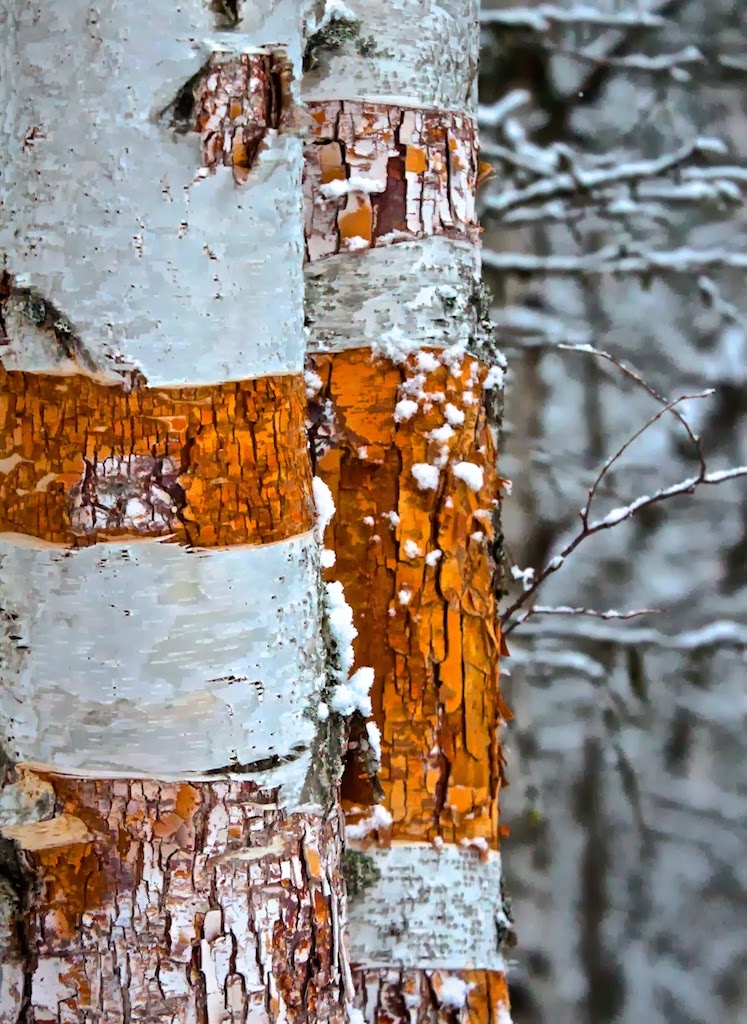 Allow me to refer you to the “twin sons” reference. On the Twin Sons of Different Mothers album recorded in 1978, Tim Weisberg (flute) teams up with Dan Fogelberg (piano, percussion) in a great (mostly instrumental) album, that if it is possible to wear down vinyl, I mashed it into the ground. It played while I studied, cooked a meal, cleaned the house, washed my hair, talked on the phone, read the paper, studied some more…all without a break in concentration. Had I possessed a reel-to-reel, the tape would keep on rolling, night and day (it’s so lovely to wake up to music playing).

So when I saw these two fellas, standing next to each other, a little different in their banding and bark, both from the same Mother Birch…well, Tim’s and Dan’s music filled my head; and that, paired with COLOR made my feet do a little dance, right there in the woods (no one’s watching). The world really isn’t all black and white, though that’s what I see out my windows. Click your heels and repeat: The world really isn’t all black and white. Look again. 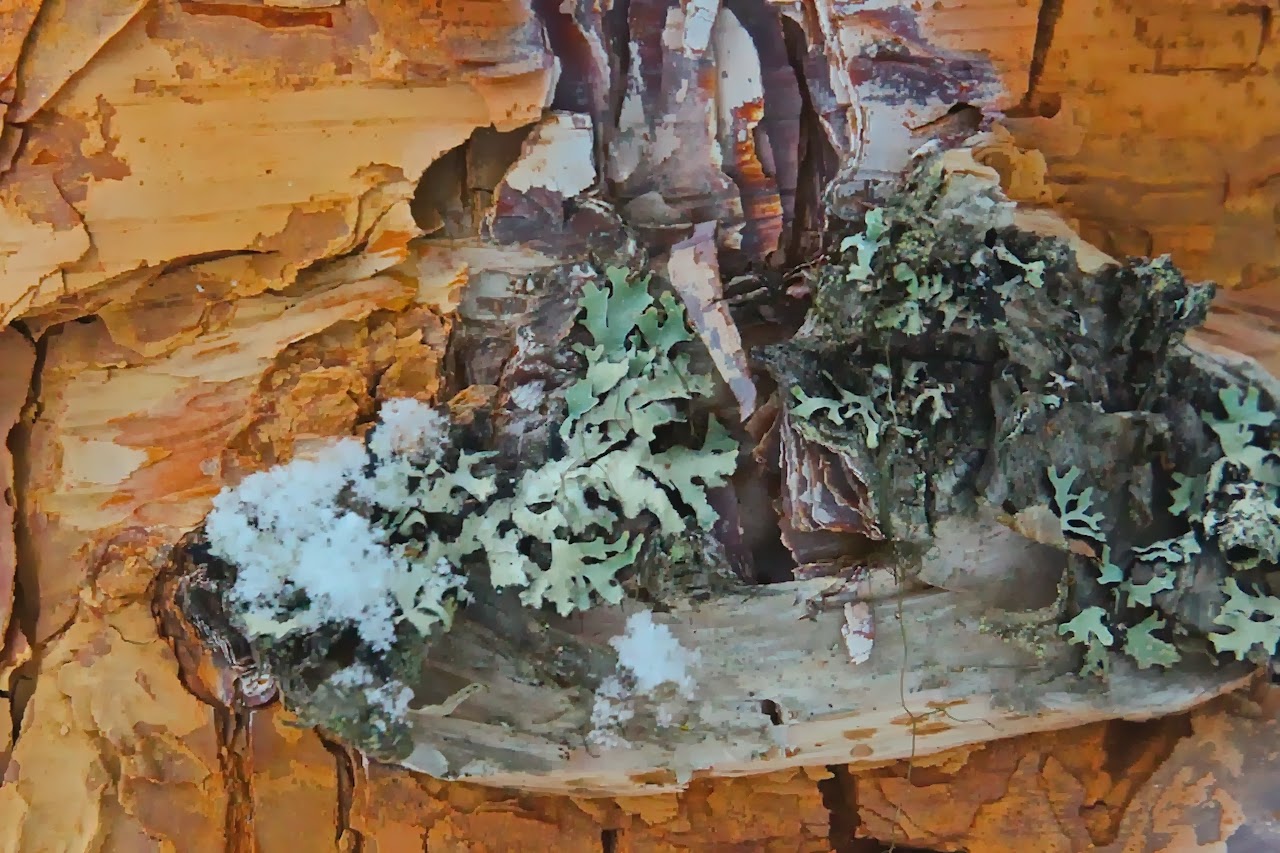 With nose to tree trunk (no worries; I was alone in the woods, no one to watch me rubbing noses with birch bark), I perused some more. When I patiently looked a little harder, paid deeper attention to the subtle layers, I found a little green garden within a patch of bark that looked so cute I wouldn’t mind moving in someday. GREEN! OMG! 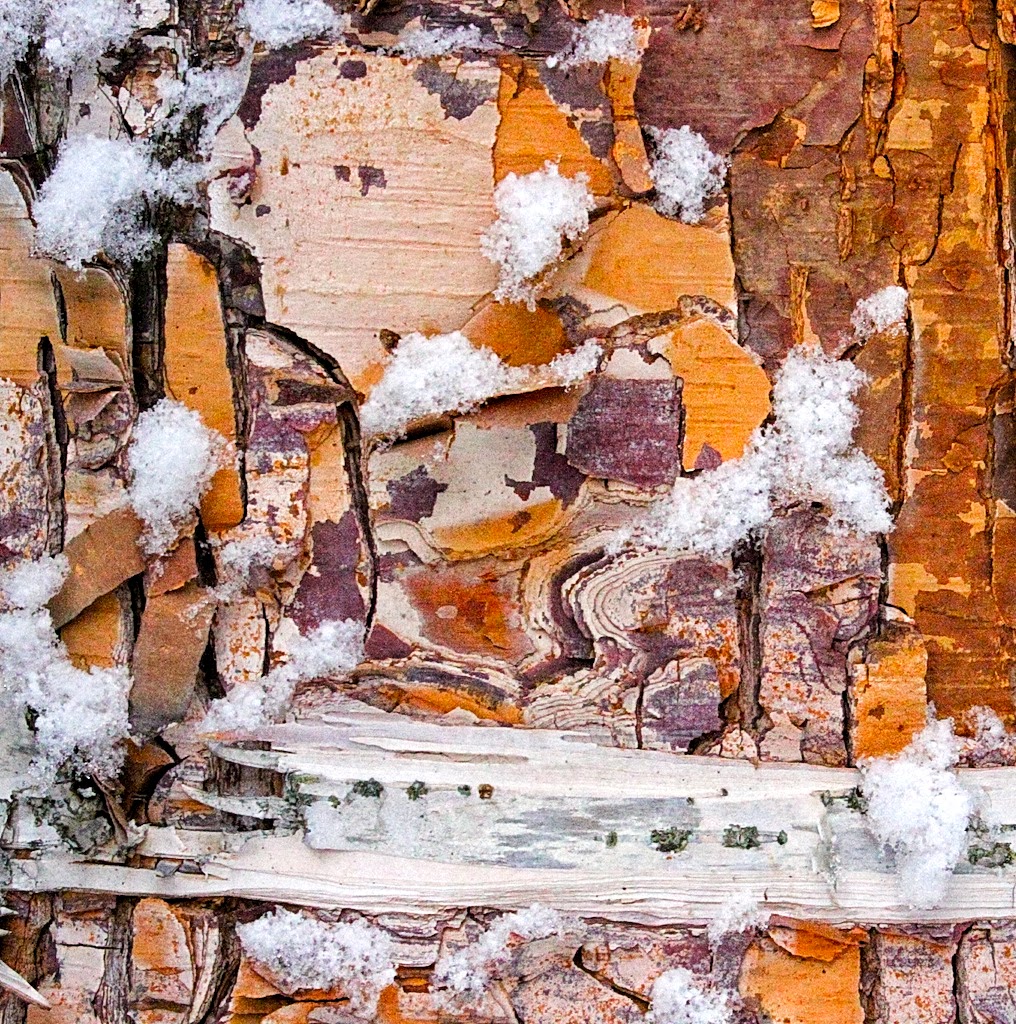 Looking deeper still, I saw varying shades of  purple and mauve and orange under those elegant purls of creamy birch bark paper. Multi-colored brushstrokes, cross-hatching, cracks in the bark, layers, and swirls of subtle color…all this adds up to luscious TEXTURE. And the airy snowflakes, with perfectly formed ice grippers on their tiny feet, hanging onto the bark for dear life. Stunning! 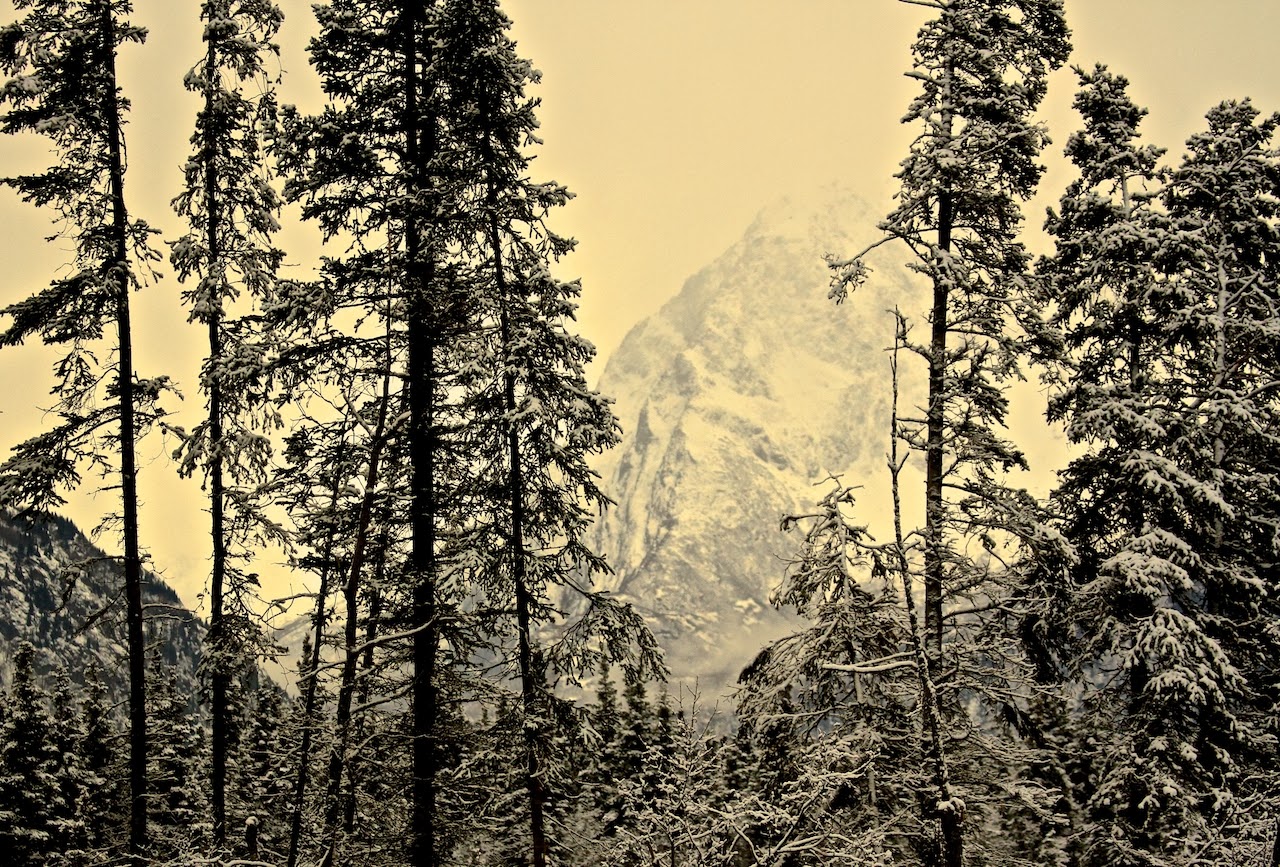 After my excitement and joy wore off, I took this last photo, on my way out of the woods, a little sepia added to turn that black and white scene on its head a bit, soften it, render it a friend, not foe.

Drawing in the fragments of light and dark, black and white, texture and color…at the end of the day, there are no missing pieces; only beauty and wonder if we commit to voracious attention, and allow what is hidden to be seen.